This weekend was short-lived but full of fun-filled German tradition (kinda). This was the third and final weekend of the famous carnival in Munich called Springfest. The bus2alps weekend actually started on Thursday, but since I had a test on Friday morning and couldn’t arrive till after, I missed a lot :/. Oh well at least I made it! I landed on Friday night and immediately met up with my sorority sister, Lexi and our two roommates in our hostel and grabbed some street food since I was hungry. We didn’t do much on Friday night since my flight came in kind of late so we just hung around and went to bed.

Early the next morning, Lexi and I ventured into the city to look for a dirndl for me (that German dress women wore in the olden days). To get into the Springfest tradition, locals and tourists wear dirndls and lederhosons. Once Lexi, Emily and I had showered and gotten ready in our dirndls, we made our way to Springfest. Thank you to bus2alps, our hostel was only a few blocks away from the event so we were walking distance.

Upon arriving, we immediately decided to ride the roller coaster and have some carnival food before heading to the beer garden. Lexi and I rode the short anti-climatic roller coaster and gobbled on some snacks. Lexi and Emily enjoyed some bratwursts while I munched on a chocolate covered strawberry/banana kebab. Soon after some wandering around the carnival grounds, we made our way into the Augustiner beer tent. 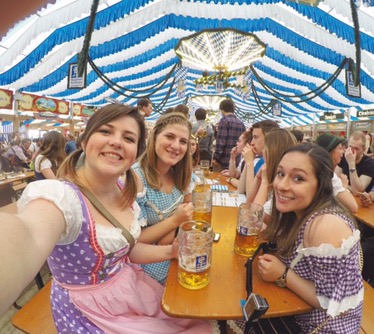 I coincidentally ran into some other kids on my study abroad program while in the beer tent which was nice. Lexi, Emily and I socialized with the people at our table who were from all over the world. We enjoyed some brews, pretzels the size of our face and had a grand ‘ol time. After many hours spent in the beer tent, Emily stayed behind with some other friends and Lexi and I made our way back to the hostel for wifi and to rest up and grab some dinner after. That ended up turning into sleeping through the night ¯\_(ツ)_/¯.

After sleeping in, Lexi, Emily and I ate some well-needed breakfast at the hostel. Lexi and I originally had planned to visit the Dachau concentration camp but we were on a time crunch to get to the airport to make our flights. We wandered around the streets of the old city of Munich looking like the stereotypical backpackers with all of our stuff. We walked through the Hofbrauhaus just to check it out and stole some coasters. It was not long after when we hopped on the train and headed for the airport. 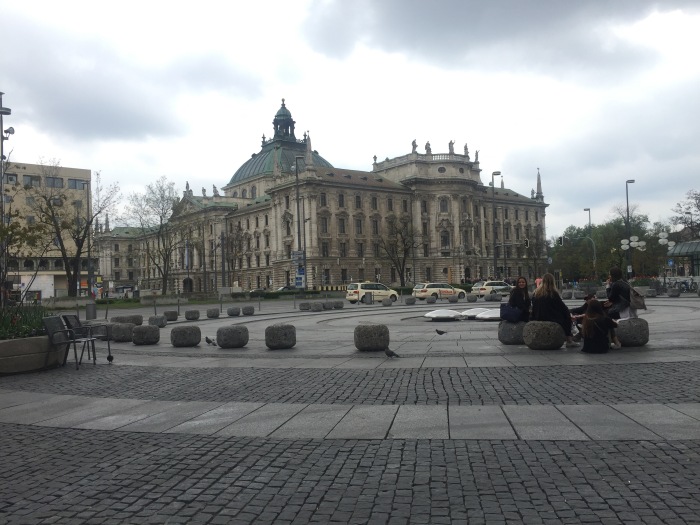 After we said our goodbyes, I made my way to my terminal and this is where things got interesting. So the tram to transport travelers from one terminal to the next was out of service for some reason and everyone who needed to get to my terminal were all crowded in one section of the airport waiting for bus service. Everything was chaotic and the staff at the airport handled the situation poorly because I and several other people missed our flight to Madrid (as well as other travelers traveling to other places). Once we got off of the bus at our terminal, I RAN at full speed to the gate where we were greeted by the staff saying that the plane had just left. What made this more annoying was that while we were on the bus, airport staff told us that flights were waiting for us because of the transportation problem. I was a hot mess by the time I got to the service desk to try and get onto another flight. Luckily, I was able to get onto another flight that evening but had to wait another three and half hours. It could’ve been worse, I was just thankful that there was another flight THAT DAY. As an apology from the airport, they gave everyone who missed their flights free water and a kit kat bar….uh thanks?? Eventually, my annoyed and sweaty self returned to Madrid late that night and I was so happy to be home.

Besides the airport situation, I had a fun and eventful weekend in Munich and will definitely return! Maybe for Oktoberfest this time? Who knows!