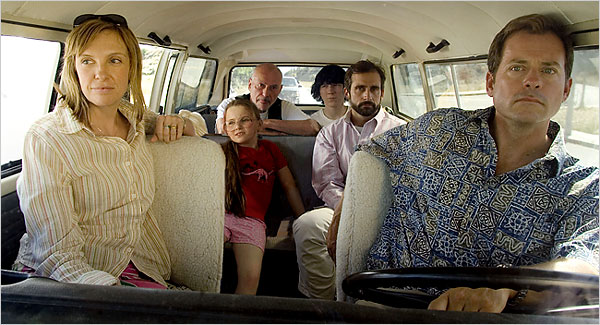 The 2006 dark comedy, Little Miss Sunshine, revolves around a working-class and quirky family embarking on a road trip throughout the American southwest to get the family’s youngest member, Olive, to a beauty pageant. As one of my favorite screenplays (it won the Oscar that year!) in recent years, I’ll be honest, writing my review on this was a little difficult because I simply cannot put into concise words how much I adore this film other than the fact that it’s amazing (slightly opinionated can’t you tell?). It’s one of those films where the characters crack you up but at the same time, make you feel so much emotion.

At the very start of the movie, it is made clear that the Hoover family is unique to the dysfunctional family trope that we typically see in Hollywood. We as viewers are quickly introduced to the pack:

Edwin (Alan Arkin)- the recently kicked out of a retirement home and heroin-addicted grandpa with an IDGAF attitude. (Richard’s father)

Richard (Greg Kinnear)- the ‘Type A’ father and aspiring motivational speaker who categorizes everyone into only winners and losers. (husband of Sheryl)

Sheryl (Toni Collette)- an overworked mother just trying to hold everyone and her sanity together. (wife of Richard)

Frank (Steve Carrell)- the gay and depressed uncle who was just recently released from the hospital for attempting suicide. (Sheryl’s brother)

Dwyane (Paul Dano)- the “I hate everyone” teenage brother who has taken a vow of silence until he achieves his dream of becoming a pilot. (Sheryl’s son from a previous marriage)

Olive (Abigail Breslin)- the slightly chubby dreamer who longs to be a beauty pageant queen and the one thing that the movie surrounds. (Richard and Sheryl’s daughter)

In the beginning, we’re clearly shown that this is no ordinary family. Frank was just released from the hospital by Sheryl, Richard who has never been successful at any job decides to pursue a career in motivational speaking and is anticipating a call from a work friend (Stan Grossman is a name we hear a lot in the film) who is supposedly going to give him some career help. We also have Dwyane, who hasn’t spoken in over a year and is constantly reading Nietzsche and exercising, and Olive who practicing her beauty pageant talent portion dance with Grandpa Edwin. It is immediately made very clear that the family does not get along. A few homophobic remarks here and there, Richard’s pessimistic comments about Olive entering the beauty pageant, Frank awkwardly explaining his suicide attempt at the dinner table and Edwin hilariously complaining about having fried chicken (again!) and we are introduced to the all-American family.

And off they go! In their dilapidated VW mini-bus, that inevitably breaks down many times throughout the film. From Alan Arkin’s scene-stealing Oscar-winning role or the adults accidentally leaving Olive at a gas station, the family encounters a series of misadventures to get from Albuquerque to Redondo Beach, California. Of course, throughout the duration of the film, the family faces some hardship. Edwin unexpectedly passes away in his sleep from an apparent heroin overdose. This comes as a pure shock when the scene is quickly cut to a confused Olive waking up her parents from the next motel room over with “Grandpa won’t wake up”. We also see that Dwyane finds out that he is color-blind and therefore realizes that he cannot pursue his dream of becoming a pilot and breaks his silence with a long scream of “FUCK”.

This movie makes me emotional because the Hoover family goes through a lot on their road trip. They cover all the bases, from failing at business ventures and seeing lifelong dreams crushed, to a death in the family that leads to some lawbreaking when they sneak the corpse out of the hospital. But even when their car has been rendered almost undrivable, they carry on for the sake of the youngest Hoover, Olive, who needs to be in Redondo Beach for a beauty pageant. As the centerpiece of the film and no matter how undermined, condemned or scrutinized she is, the most important thing is that Olive whole-heartedly believes in herself. She is taught by Edwin not to care what others think of her and not to let anyone weigh her down, thus giving her the confidence to carry on and perform in the beauty pageant.

When the pack finally arrives and realize how underqualified Olive is compared to the other hypersexualized pageant girls, they worry. In the end, the family decides to sit back and get ready to cheer her on. When, to everyone’s surprise, it is revealed that the dance routine Edwin taught to Olive all along was to Rick James’ “Super Freak”, her dancing is met with shock and disgust from the audience, followed by some “boos” and angered parents leaving with their children. The dance scene is incredibly cringe-worthy to watch at first, but it represents the development of the family, both as a collective and as individuals, that makes it a true moment of triumph. In a show of support that will bring a tear to your eye, one by one, the Hoover family joins Olive on stage in an effort to spare her any humiliation. You see the entire family up there, and just for a moment, they all truly come together as one; they may be overworked or depressed but are still good people who are not afraid to express themselves. I cannot help but smile at the end despite the pitiful applause. As the saying goes, nothing brings a family together like publicly and embarrassingly dancing to “Super Freak”.